Xavier Bueno was born in Vera de Bidasoa on January 16, 1915, son of the writer and journalist Javier Bueno, who was a correspondent in Berlin of the Madrid newspaper ABC. In 1925 the family settled in Geneva; five years later, Xavier enrolled at the Academy of Fine Arts showing a precocious talent. After a return with his mother to Spain, in Madrid, he attended the Academy of San Fernando and followed a painting course held by Vazquez Diaz.
In 1937 he moved to Paris and presented his works, characterized by a strong imprint of “Spanish” realism, at the “Salon des Tuileries”, the “Salon d’Automne”, the “Salon des Indépendants” and the “Salon d ‘ Art Mural “. He also exhibited at the Spanish Pavilion of the Universal Exhibition in New York. His main models were the Spanish classical authors, such as Velazquez, Murillo, Zurbaràn and Goya, and his painting is characterized by a social and sometimes political commitment. In 1938 Xavier was joined in Paris by his brother Antonio, three years younger and also devoted to painting. From this moment, and for a period of about ten years, a total, artistic and material partnership was established between the two.
In January 1940 he moved to Italy with his brother Antonio and his mother Hannah. What should have been just a temporary stay turned into a definitive and totalizing life experience, because they spent the rest of their lives in Florence.
In 1947, together with Antonio Bueno, Pietro Annigoni and Gregorio Sciltian, He founded the group of “Modern Painters of Reality”, whose manifesto proposes an “objective” observation of truth, of nature and its faithful reproduction as possible. At the end of the forties, coinciding with the crisis of the group, the relations between Xavier and his brother Antonio began to change, after years of common path. The causes are to be found in the progressive diversification of their respective artistic personalities; however, it was a question of a stylistic-conceptual dissent rather than a human-personal one.
The 1953 represented an important turning point for Xavier’s career: it was the year of explicit adherence to the poetics of socialist realism, adhesion that came after a personal itinerary, which saw him practicing “committed” painting since the pre-war period. Another milestone in Xavier’s career was the trip to Brazil in 1954: the artist returned from this experience full of enthusiasm and with a series of ink works whose main protagonists are children, teenagers, laborers. From this moment on, the theme of childhood became more and more recurrent, little by little the characters will be depicted motionless, in a sort of unreal fog, devoid even of depth, of perspective rigor, in which they emerge as evoked. The evolution and research carried out the day after the trip to Brazil led him towards a further thickening of the material, thickened by the addition of sand to the paint; moreover, the use of collage, already very frequent in still lifes, became conspicuous also in the figurative-portrait field.
Between 1959 and 1964 Xavier created the cycle of “Children”, suffering and melancholy images, symbolic works of a humiliated and oppressed humanity, presented at the “España libre” review and which will characterize him in a very personal and distinctive way throughout his life. The artist suddenly died on the night of July 17, 1979 in his home in Fiesole. 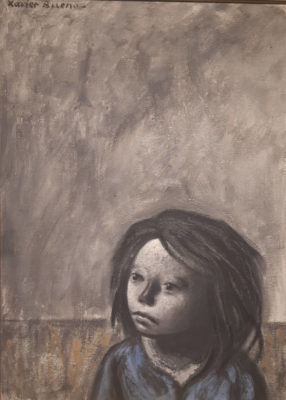